Gloucester Times: ‘Catch of a Lifetime’ 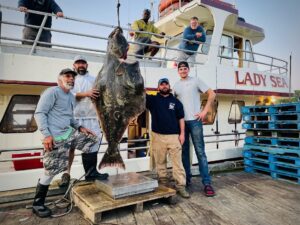 “It was definitely a catch of a lifetime,” said Michael Mann, captain of the 72-foot Lady Sea recreational fishing vessel, about the approximately 190-pound Atlantic halibut. He estimated that was the weight when they hooked it during a roughly 20-hour overnight deep sea fishing trip from Sunday to Monday.

Mann said he’s only caught small halibut, but never anything like that, though Atlantic halibut is considered the largest flatfish in the world and one of the largest fish found in the Gulf of Maine, according to NOAA Fisheries Atlantic halibut webpage. It can reach up to 15 feet in length and live up to 50 years. Fully grown females average 100 to 150 pounds, while males tend to be smaller.

Mann said they started doing overnight trips, called “Super Marathon Fishing,” in part because of lower passenger capacity due to safety restrictions during the COVID-19 pandemic.

Such trips are designed for 13 serious fishermen to get out to Fippennies Ledge, about 60 miles east of Gloucester, and only once a month. They do about three or four such trips a year.

Mann said on this trip about nine guys came with gear to catch a giant Atlantic halibut, bringing “every manner of tackle.” That includes 8-inch metal lures called jigs that can weigh 10 to 14 ounces.

But the person who hooked the monster fish on Monday, customer Nick Kirychuk, was using a boat rod from the 1980s. Mann said the man did not know what he hooked.

“He gave me the rod, and after an hour of battling, we got it on the boat,” said Mann, who wound up fighting and landing the halibut. Crew members also involved were Capt. Tim MacDonald and mates Brian Blaquiere and Matt Clark.

Mann said Kirychuk hooked the fish on a 12-ounce jig in 240 feet of water. He then handed the rod to Mann, but the halibut was not ready to give up the fight.

“After approximately 30 minutes, we got the fish to the surface, but it quickly (dove) down 200 feet again,” Mann said in an email. “We repeated the process; and when we saw it next, we got a gaff in it. The fish propelled itself off the gaff, and dove down 200 feet again. On the third try, all three crew members plus a customer gaffed it and brought it aboard.”

Mann said the landing of a fish this size was even more impressive when one considered the tackle that was used: a 6-foot solid fiberglass boat rod and a 1980s Penn Jigmaster reel with 50-pound test line.

Mann said after landing the halibut, they bled it and packed it on ice for the six-hour trip home. Mann said when they weighed it at the dock, it still weighed 161.5 pounds. It probably weighed about 190 pounds when they landed it, he said.

They are allowed to catch one halibut per boat per trip, Mann said.

Halibut was more prevalent in the 1970s and ‘80s, he said, but the fish has been wiped out. NOAA considers Atlantic halibut stock “at a very low level.”

Mann, who turns 37 this year, said he started working on fishing vessels when he was 12, and “catching halibut wasn’t a thing.”

When they arrived back in Gloucester on Monday around 8 p.m., they needed a place to weigh the fish, but everyone was closed, and Mann said Tessa Browne, owner of Cape Ann Lobstermen on East Main Street, let them use the company’s winch and scale. He said everyone on the boat went home with about 10 pounds of halibut, while the gentleman who hooked the giant fish got to keep 40 pounds.

Nick Giacalone, an owner of Fishermen’s Wharf seafood market on Rogers Street, said it’s “not too rare” for a large commercial dragger to come in with a halibut of anywhere from 85 to 200 pounds. The market has gotten those in the past. But Giacalone said he’s never heard of someone landing such a large halibut using a rod and reel.

“Me, personally, I’ve never heard of one coming in that big. That’s awesome,” Giacalone said.

NOAA Greater Atlantic Regional Fisheries spokesperson Allison Ferreira said in an email that this was not a record fish or even unusual, after consulting with the agency’s groundfish team. NOAA’s Atlantic halibut webpage states that the largest Atlantic halibut ever recorded was taken off Cape Ann with a weight of 615 pounds, eviscerated with its head attached. It likely weighed 700 pounds when alive.

So, while this was not a record fish, it was still quite a feat. Ferreira said the International Gamefish Association says the largest Atlantic halibut landed in the United States with rod and reel gear weighed 255 pounds in 1989, and it was caught off Gloucester. She said colleagues told her the size of a halibut typically caught with a rod and reel are less than 100 pounds.

“So, although not unusual, this is a great fishing achievement!” she noted. Recreational fishing regulations for Atlantic halibut are one fish per vessel that is at least 41 inches in total length.

Andrea Holbrook contributed to this story by Ethan Forman, who may be contacted at 978-675-2714 or eforman@northofboston.com.